The organ at St. John’s is built of 1,740 pipes arranged in 29 ranks (sets or rows of pipes) to produce 23 voices. 740 Great and Pedal pipes, including the Festival Trumpet, are in wooden cases on both sides of the chancel above the choir singers. The other 1,000 pipes are in a Swell chamber south of the chancel, accessible from the second floor.

In the 1970s a fire damaged the building extensively and destroyed the organ. Reuter built a new organ of 18 voices, 21 ranks including a wooden case containing the Pedal Principal pipes. In the early 1980’s a new Great was added on the north wall of the chancel and a Festival Trumpet was added on the south wall, which uses hooded pipes to direct the sound horizontally.

In 2009 considerable additions were added, thus finishing out the initial design of the organ.  The console was rebuilt with new stop controls, solid state combination action, and 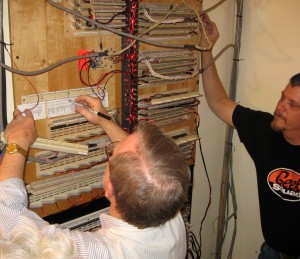 additional pistons and toestuds; replaced the original Swell main chest with a new chest that does not use thin leather or complex wood channels that can be damaged by humidity changes: rescaled the retained Swell fine pipes; replaced the reed pipes; revoiced the Great to fit with the new Swell; and made certain Swell stops playable from the Great keyboard  to make it easier to accompany choir and soloists.

The sound is clear and lively, thanks to the brick walls, a stone floor, and no absorbent  surfaces. Since neither the building’s volume nor the amount of parallel surfaces is large, the reverberation is not long, but the sound is natural and gratifying.