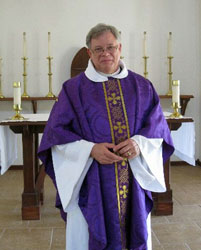 Member of the Society of the Holy Cross (SSC) and the Catholic Clerical Union (CCU) and currently serves the Bishop of Fort Worth, The Right Rev. Jack Leo Iker, as Dean of the Fort Worth East deanery.

He is married to Diane N. Klein, who serves as the parish secretary and office manager. They have one daughter Sara C. Robertson and a wonderful son in law Charles Robertson.

The Reverend William T. Estes, Assistant to the Rector 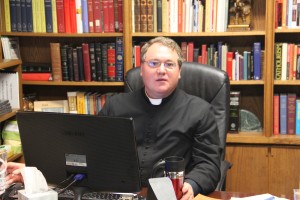 Fr. Bill has served and ministered at St. John’s as Assistant to the Rector since 2011.

Fr. Bill was born in Memphis, Tennessee in 1966. He earned an Associate degree in Music from Faulkner State Community College and graduated from the University of Memphis with a degree in Commercial Music. He worked in the commercial music industry before responding to God’s call to the ministry. He earned his Masters of Theological Studies from Nashotah House Theological Seminary and Mission in southeast Wisconsin.

He served as Curate at Grace Episcopal Church, Monroe, Louisiana from 2006 through 2008. In addition to regular pastoral duties he was Chaplain to Grace’s pre-K through 8th grade parochial school, as well as their middle school Religion teacher. Prior to accepting the call to St. John’s, he served for two years as Priest in Charge of Cross of Christ Anglican Church in Glen Rose, Texas which is a mission congregation of our Diocese.

Fr. Bill and Lisa have been married for 19 years and are the proud parents of five children, three boys and two girls. 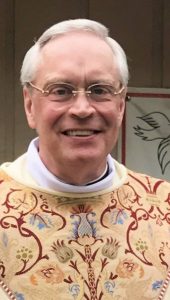 Fr. Bob Bosworth, Ph.D. is on staff at St. John’s providing individual, marriage and family counseling. Fr. Bob earned a Bachelor of Music degree from Southern Illinois University, a Master of Divinity degree from Nashotah House Theological Seminary, and a Doctorate in Counseling Psychology from Pillsbury College. He is a licensed Clinical Pastoral Counselor. Fr. Bob has over 25 years of active ministry in Episcopal Church parishes in Texas and Kentucky. He is now retired and we are blessed that he serves at St. John’s as a pastoral assistant.

While he is an Anglican priest, his practice reaches to anyone. All persons are treated with equal dignity, being created in the image and likeness of God. His counseling practice is a volunteer ministry. He does not receive a salary for his work. His office is provided by St. John’s. All fees are based on what an individual or family can afford, and 100{8ab28728e6cfa90158a0104821d8f62b3259d1c73034263ff397a00582c934b9} of fees are donated to charity. No one who wishes and needs counseling will be turned away because of their ability to pay. He does not accept insurance.

Fr. Bob is a member in good standing of the Catholic Psychotherapists’ Association and the National Christian Counselors Association. Fr. Bosworth can be reached at 817-475-4475. His email is DrFrBob@gmail.com.